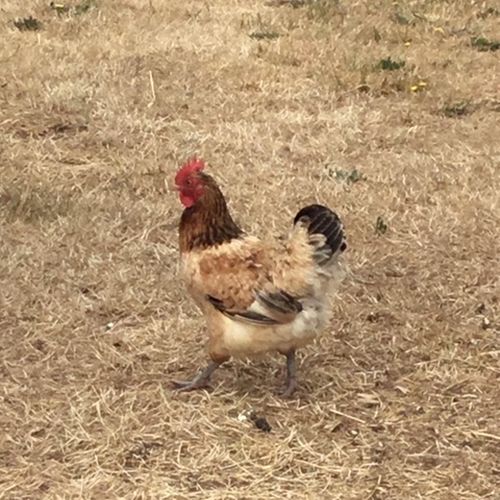 Chooks usually get a bad rap when it comes to intelligence, and I’ll admit they’ve never struck me as being the smartest of birds – although there is evidence to suggest that, like sheep, which also have an unfortunate reputation when it comes to intelligence – chooks are a lot smarter than they seem. But over the years we‘ve kept chooks there have been a few who have stood out as definite personalities, and some can certainly have distinct characteristics. There have been some that proved permanently flighty, and overly protective of their chicks, while others have been pretty laid back about the whole mothering experience. Interestingly these are often the ones who prove to be the most successful mothers, as well as the ones whose offspring tend to be the most laid back. Nature or nurture?

A surprise this season has been witnessing the cooperative approach to motherhood displayed by two hens who decided to share the nest and so were both involved in hatching the very few eggs we left them. Of the two chicks that hatched, only one has survived – we think the other was probably inadvertently squashed by one or other hen – and parenting duties have been shared, resulting in what I think is a ‘smothering’ and it will be interesting to note how this chicken develops once the mothers abandon it, which they eventually will do.

This season we have a population explosion resulting from several chooks going bush to lay their eggs, and our failure to find them in time, but among the crowd Sandy Chook stands out. At least she does at the moment as the berries are ripening. She just loves berries, and is wise to the time when I start picking them. Needless to say the boysenberries, strawberries and raspberries are all covered so neither she, her feathered cousins, or the tiresome, invasive and determined blackbirds, can get in to nick them, but she always has her eye to the main chance and would be in like Flynn if she could. As would the blackbirds who are cunning personified when it comes to locating the smallest hole in the netting in the hope of sneaking a feed. I do give Sandy Chook the ones that have been half-eaten by the expletive blackbirds, and naturally enough she’s wise to this too so hangs around in daily expectation of such largesse.

For the rest of the year she’s mostly indistinguishable from all the other chooks when it comes to personality, although she always stands out due to her colour since most of our chooks are predominantly black, but come summer and berry time I can guarantee there will be a loyal, hopeful and expectant follower on morning berry picking tasks.

It's been a strange summer so far as growing and harvesting vegies goes, and I know from speaking with others…
Click for more details