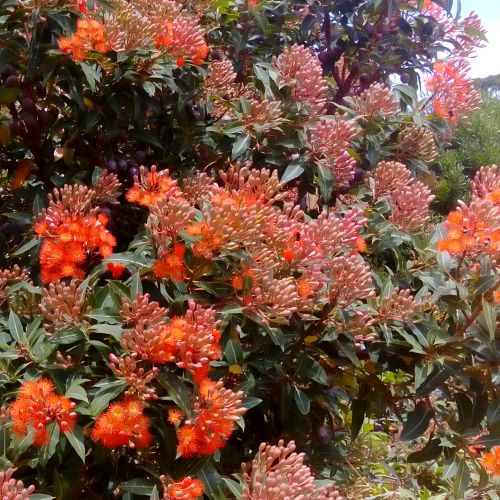 The Eucalyptus ficifolia, or red flowering gums, are beginning to break out in blossom and I’m reminded of our Bruny Island trip last year, and the stunning tree we saw in a garden there while walking down to the jetty to join the Pennicott cruise boat. Tickets to the cruise were the result of a successful bid in a silent auction fundraiser in the aftermath of the April 2015 Nepal earthquake. I still have no idea if I paid over the top for them, or got a really good deal, and it doesn’t matter anyway because goodness knows, the cause was worthy, and the trip more than lived up to expectations. Talk about a wild ride, and thank goodness for the industrial strength waterproof ponchos that were provided – an essential garment given the soaking that was par for the course, even on a fine day!
No guarantees are given about spotting the marine wildlife that abounds in this remote southern Tasmanian coastal region. It’s pure luck as to which species are around on the day, but sadly no dolphins came out to play the morning we went. The colony of Australian fur seals though were another kettle of fish – if you’ll excuse the pun. The rocky outcrops that characterise this region are where the male of the species hang out.

They are batchelors for much of the year, only getting together with the females when it’s time to mate. The boys, both old and young, were plentiful and in full voice. And odour! These fur seals are a federally protected species, and although ungainly and cumbersome while moving about on the rocks, in the water, where the mostly youthful members were having a high old time diving, frolicking, fishing and playing about, it was a different story. There they were sleek, swift and totally at home.

But, back to the ficifolia. Although the species is always referred to as red flowering, in fact I’ve seen colours around home ranging from the magificent tree we had at our previous property, which was a beautiful soft peach, to the pink, salmon pink, and red versions we have on our current one.

The rich orange of the Bruny specimen was entirely new to us, and naturally my green fingered, native tree-loving partner just had to try and find some seed. Ahem, we did too, without any serious need to trespass (nobody was home, we did check!), and 12 months on there are now two small ficifolias growing well. Because their parent produced orange blossom, I’m assured its offspring will too. Here’s hoping – although quite where they will eventually be put in our increasingly over-crowded garden remains to be seen.