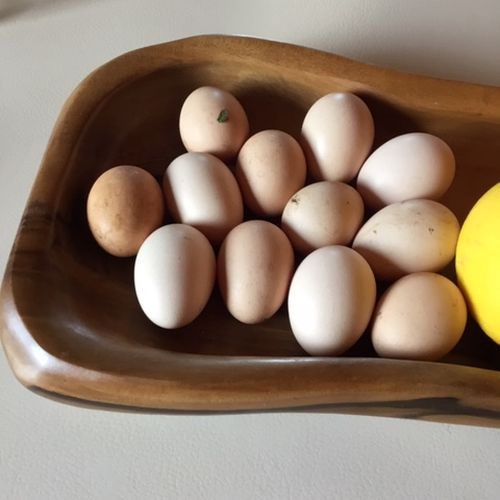 For almost the first time ever our chooks have continued to lay eggs throughout the winter months. It’s not quite the first time, because when still living at our previous property there was a year when I followed the instructions given to me by a friend, who assured me hens would continue laying eggs in the winter months if their diet included some seriously hot and spicy ‘porridge’ two or three times a week. I was sceptical, but it did actually work – although it was a bit time-consuming to make. The girls kept right on laying, although not every day. Some element in the ‘hot and spicy’ apparently triggers the desire to lay an egg, but cooking up food scraps with oats, bran, bread crusts etc, and then adding generous pinches of cayenne, chilli, black pepper and curry powder into the mix did rather stink out the kitchen. It worked though!

However spiced porridge isn’t the reason the girls have kept laying this year. I’m not actually sure of the reason they’ve done so, but my theory is it’s due to either rivalry, or peer pressure following the addition to our small flock with a ring-in.

Earlier this year, as our neighbours prepared to put their house on the market, they rounded up their free-ranging hens in order to rehome them. Despite assuring his wife he’d corralled them all, it seems Rob couldn’t count. A renegade turned up a few days later. Although she’s a different breed, and larger than the bantams we have, we offered to take her if Rob was able to catch her, and hopefully she would be accepted by our girls.

Rob’s mission was accomplished, and fortunately ruffled feathers weren’t an issue, so Henny-Penny was soon happily pecking away with our chooks and doing what hens do best: laying eggs. But perhaps being of a breed that keeps on laying regardless of the season she kept on laying even as the weather cooled, and when most hens take a break for a month or three.

Which brings me to my rivalry theory. Our chooks were not going to be outdone by an uppity newcomer, so anything she did they were going to do also. Who knows if I’m right, but the egg supply has barely missed a beat all through winter, to the point where we’ve even had enough eggs sometimes to give the occasional six or eight away. What a bonus just for giving an unwanted hen a home!