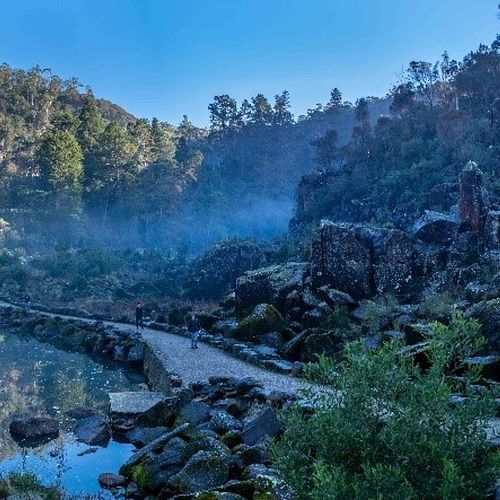 So much for the best laid plans, and all that optimism post last year’s writers’ festival. While the book writing hasn’t exactly gone according to script, a serious start has been made and I can say, with hand firmly on heart, it is underway even if it’s not progressed as far as I both anticipated and intended.

The bread-and-butter writing obviously takes precedence, and there are other commitments – some might say distractions – in life, like federal elections for example, which despite all the predictions and polls, (and the efforts of those on the left side of the political divide) saw the Coalition returned to government. Before you ask, no, I’m not a fan. Not at all. If the pulp mill campaign did nothing else it made me far more politically aware, and left me totally disgusted with both the major parties in the context of the pulp mill project, and Labor and the Liberals’ continued irrational support for it.

During those years I found my tribe in the Greens, and they remain my tribe, along with other organisations and groups whose focus leans towards environmental protection, animal welfare, social justice and conservation. The down side to the ever-increasing need to support all the campaigns being run by these groups, and that require championing, is the time it takes. Ensuring Queensland’s Adani coalmine is ditched, Tasmania’s Tarkine/takayna is protected, and inappropriate developments are not approved at Cambria Green or Lake Malbena, or – most recently – in Launceston’s Cataract Gorge are all too often distractions from the main game, and I realise I’m guilty at failing both to ignore them, or say ‘No’ to requests for assistance in promoting them.

Most recently it’s the invitation, (persuasion more like) to be involved in the committee formed to oppose the Gorge Skyway proposal that has dominated a bit, despite my best efforts to distance myself a little. Fingers crossed, this will not be a lengthy fight to keep the Gorge free of the proposed 24, 8-seater see-through glass gondolas circling this unique and special place that was gifted to the people of Launceston over 100 years ago, and is therefore managed by the Council. As I said in my recent letter to the Examiner – that was strangely published two weeks in a row:
“Numerous surveys, polls and tourism publications nominate the Cataract Gorge as Launceston’s ‘number-one tourist attraction’. And rightly so, consistently voting a visit to the Gorge as among the top three places to go in Tasmania.  Also consistent is why it rates so highly: the Gorge’s relatively unspoiled and natural environment. Yes, there has been some relatively low-key development in the Gorge since European settlement, so to describe it as ‘pristine’ isn’t exactly true either. But times change, and so do perceptions and values, and it’s pretty clear from speaking with some of those Gorge visitors, that it’s these all-too-rare unspoiled and natural features that are what people really appreciate and enjoy. They’re blown away that we have such a stunning and accessible natural public space that combines park, garden, wilderness, swimming area, Indigenous heritage, and playground, all together in the middle of a city. People value the fact the Gorge doesn’t resemble an overcrowded theme park, and that it’s not been over-developed. We are incredibly fortunate to have such a unique point of difference, and it would be unwise to ignore it. Not all development is good – and the idea of multiple gondolas coming from every which way, that must inevitably intrude into the peace, privacy and serenity of the Gorge experience not only risks causing unnecessary social division, it also risks coming at an enormous economic cost for our community if all those tourists that currently come to experience that unique natural experience choose to bypass Launceston, and go elsewhere.” Here’s hoping this will prove to be a short-lived and successful campaign so my attention can soon return to my own writing project, before ongoing commitments to next year’s Tamar Valley Writers’ Festival start to seriously take over.
#handsoffourgorge