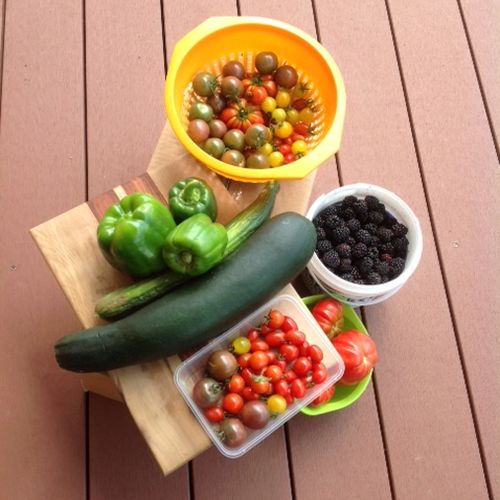 It’s been a strange summer so far as growing and harvesting vegies goes, and I know from speaking with others that we’re far from alone in wondering if and when the tomatoes are going to ripen. Ditto the raspberries. We have two varieties of rasps, one is early, the other late – even into May/June if the weather is kind. This year though both are proving frustratingly tardy.

Despite lush green growth and looking fabulously healthy, the former has limped along providing us with meagre fare. The other teases with literally masses of fruit that’s budding up well, but which stubbornly refuses to reach the pickable stage.

It should be noted that I absolutely adore raspberries so to potentially have so many sitting there refusing to ripen is driving me nuts!

Tomatoes are also proving incredibly slow to show any hint of colour; although I did pick the first couple yesterday. The vines are loaded and John is moaning that summer will be over before the tomatoes are ready. Personally I doubt it given the changing climate means warm summer days now extend well into March, and even April even if the nights are cooler.

I just look at both crops and think, Oh my goodness, when they do actually ripen they’re going to do so all at once, and in a rush, and for a few weeks my life will be dominated, both by picking them, and then – in the case of the tomatoes especially – processing them and cooking up a storm ready to freeze for winter soups, casseroles and pasta sauces.

This is of course a good problem to have, and I’m not complaining, but it makes me wonder how the commercial growers of our fruits and vegetables are managing since their crops must be similarly affected, and with climate change it’s a seasonal production situation likely to become ever more challenging.

As for me well I’d be naturally much happier if these two crops could have sorted their growing and ripening styles a bit more conveniently. But at least they are growing, and they do look like ripening soon, and that’s a good thing. I just need to be patient and wait for nature to do her bit. Which she will of course, but in her own good time.

In the meantime there’s an abundance of cucumbers and thornless blackberries, a steady supply of capsicums, a second crop of peas to anticipate, and what currently looks like considerably more pumpkins than we managed to harvest last year, so we’re unlikely to starve. Always a plus.