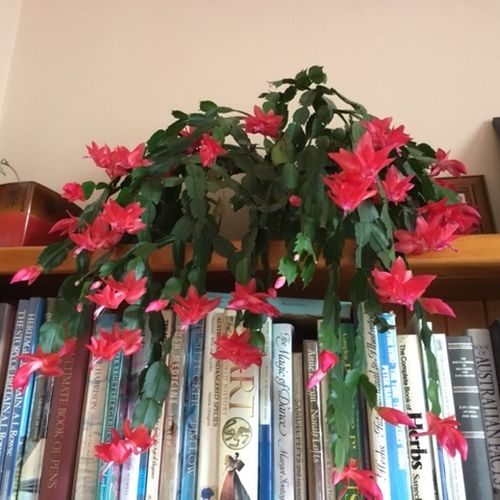 They say having houseplants keeps houses healthy by purifying the air we breathe. They’re also good for concentration and productivity, as well as reducing stress levels and improving our moods. Based on that assessment I should be a picture of calmness and serenity, while pumping out written pieces by the dozen since our home is certainly not short of plants.

I have my mother to largely thank for this since she was very green-fingered. There were always plants throughout the house, as well as in the garden. The indoor plants were often flowering ones, possibly as a cheerful antidote to the northern hemisphere’s dark winter days, and a comparatively short summer, but my mum loved flowers, and planting bowls of hyacinth, iris, narcissi, crocus, and tulips each year – and keeping them in the windowless outhouse (formerly a coal cellar) until their green shoots peeped through, and they were deemed ready to bring into the house – was an annual ritual.

While I appreciate a lovely garden as much as the next person, gardening has never been a particular interest, and I certainly don’t believe I inherited my mother’s green-fingers, but that said I have been surprisingly successful when it comes to houseplants. This is despite no conscious effort on my part since I’m absolutely in the school-of-healthy-neglect category. Few of my plants are flowering varieties, but checking in with them this week to feed and water them, I was suddenly struck by how long some of these plants have been with me. And how all of them have their stories. I knew I was being overly optimistic in expecting my few houseplants to survive the journey, when I packed up my WA house over thirty years ago to move to Tasmania. Several weeks spent boxed up in a container, with no light or water, and then obliged to undergo mandatory fumigation on arrival, was probably expecting a bit much. I took a chance, knowing it was always going to be case of the survival of the fittest, and four plants proved themselves to be seriously fit. Of those, three are still with me, and as well as surviving and thriving, have also proved sufficiently vigorous, and able to produce multiple cuttings to give away to friends. I only said goodbye to the fourth when we moved to our current home. The philodendron was my first plant, bought when I moved into a flat on my own, a few months after arriving in Australia. It grew slowly but steadily, was re-potted many times over the course of the years, but old age had definitely set in as we prepared to move five years ago. Time to say goodbye.

Both the lemon vine and peperomia however are still with me. As is the unnamed plant that grew from a piece taken from one of the plants in the public library where I worked. I wasn’t responsible for pinching a bit, I hasten to add – one of my colleagues was, and she gave us all a bit to grow. Clearly it was a popular office-type plant, capable of surviving indifferent and haphazard care, with creeper tendencies that need to be kept in check – hence the need for periodic haircuts. But it was clearly hardy, and so it has proved. Over the years it’s received many a haircut, and various progeny are in pots around my house, and those of friends, as is the lemon vine that was a gift when I moved into my own house. With Deb’s untimely death last year it has assumed an even more special status, being a constant reminder of her friendship and importance in my life. As for the peperomia, that also reminds me of another library colleague, Lorraine, who broke off a piece one day after tennis, saying how easy it would be to grow. She was right!

As for the other plants, their stories are for another day.