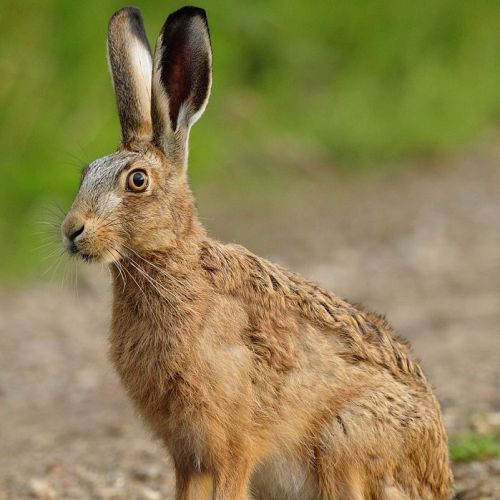 Mad as a March hare

This is an expression I grew up hearing in the UK, where hares are – or were – quite common in rural regions, but I never gave a great deal of thought about why these animals were considered ‘mad’.

It’s only since living in Tasmania, and my particular corner of it, that I’ve come to fully appreciate the reason. These normally quite elusive and solitary animals really do behave quite differently in spring. Or now in other words, during September and October, when the urge to mate and breed is uppermost in their minds, and they appear happy to risk life and limb sometimes in order to do so. Certainly their behaviour can be extraordinarily reckless, and not for the first time since living at this property – one that’s surrounded by the open paddocks and grassy vacant blocks that are ideal hare habitat – we’ve spotted hares casually hopping along the driveway seemingly oblivious to Della dog, who’d normally be after them like a shot.

Fortunately for the hares, Della’s attention is currently fully occupied on the rapidly expanding rabbit family, that’s taken up residence under one of the sheds, and she’s patiently waiting for one of the youngsters to stray too far from the burrow, perhaps tempted by the lush grass that’s a bit further away than is safe.

If we see a hare or three while on our morning walks though, it’s a different story. Then, it’s all on to hold her as she strains to escape the leash and chase them. And before the development that is relentlessly taking over what was once prime farmland, but which has now been sub-divided into residential blocks, she could and did do just that. Not that she ever succeeded in catching one, but it wasn’t for want of trying and they led her a merry dance for the duration, so she certainly got her exercise even if it never translated into a meal.

Sadly those days of being able to run free to sniff and explore are a receding memory as the opportunities to do so dwindle in a landscape that’s being recalibrated. Once a haven for wildlife, the semi-rural area we moved to so many years ago has seen ever more development being approved as rules have been relaxed to enable more housing to be built.

All the development has, and is, displacing wildlife, and along with the risk of species’ loss, roadkill is often the result. At this time of year, roadkill includes hares. Never mind they’re an introduced species with all the controversy that entails, it’s still confronting and immeasurably sad to find a roadkilled hare that a few hours before would have been leaping and running about, full of the joys of spring, but for a crazy misguided moment when it leapt in the wrong direction.

You’ve made your point. Great effort, and trust me, it’s appreciated. You’ve outdone yourselves this year and produced the best…
Click for more details

Plovers are not generally regarded as being the smartest of birds. For example their location choice for nest building can…
Click for more details