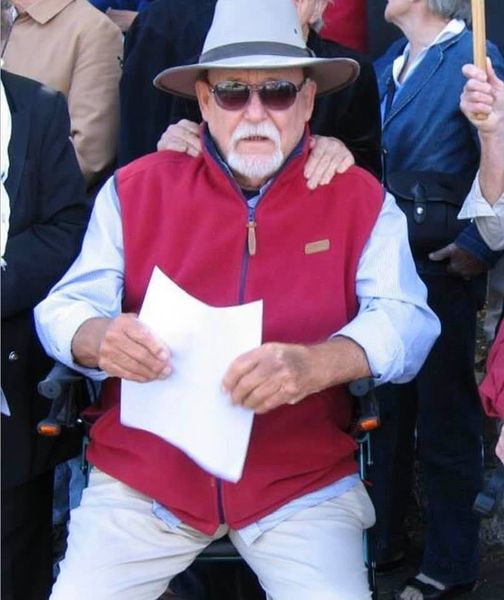 Of those who campaigned long and hard to ensure the pulp mill would never pollute the Tamar Valley, there were many who didn’t live to see it through to the end. Some of these people I knew only from reputation, some I didn’t know at all, and one or two I knew quite well. Several others have died in the years since. The most recent of these was a man who during, and afterwards, became a good friend, and who – together with his wife Joan – is among my interviewees for the book.

The magnificent Buck Emberg left the world on the last day of November, after a life that truly was well-lived. He’d been a teacher, writer, philosopher, and restaurateur among other occupations. He was also a wonderful teller of tales about his colourful and varied life.

This being Launceston, although I didn’t get to know Buck properly until the campaign, I’d actually met him briefly years before, during the florist shop days when he ordered flowers for Joan – perhaps for her birthday or their anniversary. Being Buck, he wanted to swap stories about our respective non-Tasmanian backgrounds and how we came to be living here. Buck was American, with Swedish ancestry. His name stuck in my memory too because of occasional articles in the paper that mentioned the Embergs, and their belief the thylacine wasn’t extinct at all. Buck was convinced they’d seen one, and he and Joan were making plans to follow some strong leads and prove these elusive animals were still around. It didn’t happen of course.

A decade or so later I met them both again at the meetings of Tasmanians Against the Pulp Mill, or TAP, a group I only attended infrequently, but which they went to regularly. Buck and Joan were the architects of the amazingly successful Voters Block initiative, designed to make the state’s politicians sit up and take notice that the mill issue crossed party lines, and people were prepared to vote for those candidates who opposed the mill. It remains the largest petition ever to be presented to Tasmania’s parliament, and it threatened the cosy Liberal and Labor duopoly. It also indicated a significant increase in support for the Greens in the lead up to the 2010 state election – indicative of community opposition to the pulp mill.

A newspaper that focused on the facts about the mill, challenging the spin that had become a regular feature of Gunns’ ‘mouthpiece’, The Examiner, was another of Buck’s clever and creative campaign ideas. Only one issue was ever produced, but it served its purpose, and was subsequently used as a referenced authority on many aspects relating to the mill, and the negative impacts it would have on the region’s economy, environment, and the health of all those living in Launceston and the Tamar Valley.

No surprise then that the wake held in December was an opportunity for Buck’s many friends from those campaign days to reminisce and remind ourselves and others of what a determined and committed community can achieve. It was also a sharp reminder for me to be much more focused in the coming year, and ensure the first draft of this book is completed.