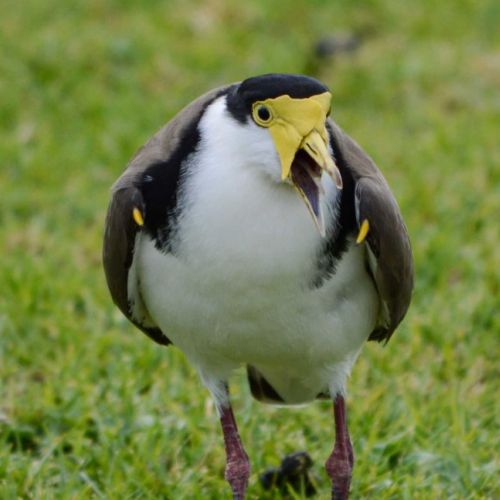 Plovers are not generally regarded as being the smartest of birds. For example their location choice for nest building can be seriously unwise, and given their propensity for choosing to nest on roadside verges, and on or close to traffic islands, along with their apparent total disregard for safety in the face of moving vehicles, it’s hardly surprising the results are often fatal. Such scatty behaviour is possibly also why plovers are sometimes derided as neither the best or most caring and attentive of parents.

A common urban myth is that although the birds have two clutches of three or four eggs each season, very few chicks are successfully raised. Their real estate choice is part of it of course, but their unwise and comparatively exposed nesting locations, that include a preference for sharing paddocks with grazing animals, is that eggs and half-grown chicks are sacrificed to hawks and eagles, or other predators such as feral cats, who are all on the hunt for a meal. Studies have shown otherwise, and in fact most plover chicks are successfully raised to adulthood. The upending of the unfair reputation plovers have earned is something we’ve been able to witness first hand over the past few weeks, through observing a plover family while regularly passing the birds’ paddock home during Della dog’s afternoon walk.

Far from being casual and uncaring, this pair of adult plovers – or masked lapwings to give them their correct name – have been exemplary parents. The parenting role is clearly shared, with two chicks generally following dad, while mum keeps an eye on the other pair.

Then one day we noticed one of the chicks, teenagers by this time, had suffered an injury. It was limping, and was struggling to keep up. Over the next few days we noticed parenting duties had been revised. One adult was looking after three juveniles, while the other was completely focused on its injured offspring. Whatever had happened to Hoppy, the parents weren’t about to abandon him. But neither did his injured leg improve, so when it was time for flying lessons, Hoppy wasn’t able to manage. Getting about was still obviously a problem, and getting off the ground, (and landing again) would be impossible. Even so mum or dad stuck with him, and could always be seen nearby giving encouragement and protection.

This went on for days. We couldn’t believe the loyalty being shown, and every afternoon fully expected Hoppy to have finally died of exhaustion, been abandoned, or taken by a predator. Of course eventually there was an afternoon when one of those outcomes must have occurred. We didn’t see Hoppy, his parents or his siblings for two or three days. The family had flown off, and the harsh laws of nature had indeed kicked in. But it was still incredible to see such extraordinary devotion and care for so many days from a species that is widely dismissed and derided as being scatter-brained and silly.

Both images sourced on Google images

So here we go again. A spot of déjà vu after agreeing to be on the ticket supporting Tasmanian Greens…
Click for more details

Red flowering eucalypts are renowned for their colour range, and our garden can almost boast the full palette, especially now…
Click for more details