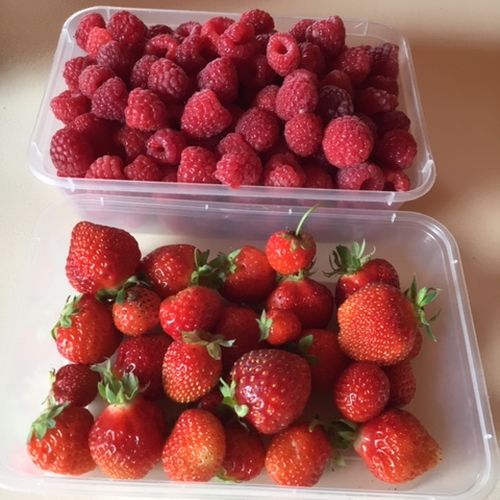 By the time March comes around all the daily harvesting of produce does become a bit tedious and rather a grind, but there are compensations. One of them is having a steady crop of raspberries and strawberries for weeks on end.

The strawberries have been into their second fruiting for a week or so now and are producing well, while we have two varieties of raspberries; one an early fruiting variety, and the other that produces in autumn. Despite the weather being far from autumnal so far this year, the latter variety is going gangbusters and there are loads more berries to come. Which is lovely, and I’m definitely not complaining, but at the same time I’m rather over having to devote time to picking them each day, and the scratched arms that go with the territory and are an occupational hazard.

I was in the UK last year from early May, but for almost the entire month John continued to enjoy a generous handful of raspberries for his dessert each evening, something he gleefully told me each time we spoke, and the way things are looking this year will be no different – unless the weather changes dramatically of course which isn’t looking too likely at the moment.

As for the tomatoes, still they come, although they are slowing up rapidly. I’ve chopped, sliced diced, and cooked them up with the usual onions, garlic, chilli, capsicum and zucchini; made relish, and given masses away, and once again the freezer is chockers, so the pressure is off when it’s time for winter-warming casseroles and pasta dishes.

This year though we also have more than a few containers of raspberries and boysenberries jostling for freezer space, which is of course a very satisfying position to be in as we head towards cooler weather, darker days, and the inevitable colder nights. In the meantime the Tomato Cookbook has pride of place on the bench as I seek out new recipes to keep pace with these fabulous fruity vegetables while they remain so abundant.