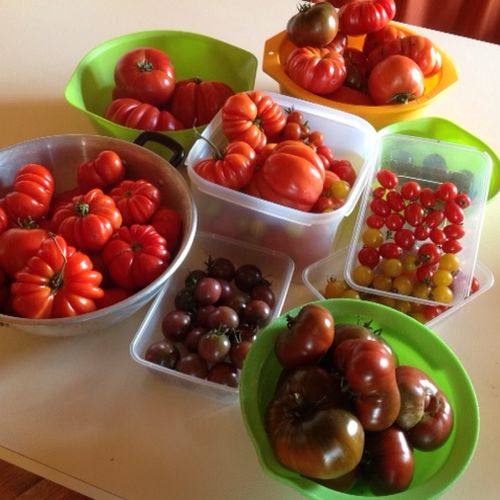 Probably because of the cooler-than-usual January and February, our tomatoes were very slow to ripen this year. That all changed as soon as March arrived – and with it, finally, some hot weather. Almost overnight we went from moaning at the pathetically few specimens ready to pick, to having so many it’s become almost impossible to keep up. After the morning’s pick they line the kitchen bench in an assortment of containers appropriate to their size. Tomatoes are now a mandatory component of almost every meal; we’ve given masses away, and I’ve cooked up several large batches with onions, garlic, capsicums, and chillies or herbs – all of which we also grow. But there’s only so much room in the freezer, and ours has almost reached capacity, so what to do given there’s an abundance still to ripen?
A chance remark by a friend the other day reminded me I have a dehydrator. I was persuaded to buy this gadget several years ago, but it hasn’t been used as much as I anticipated it would be. Pre the dehydrator I did once have a go at drying tomatoes in the oven, but preparing them was fiddly and time-consuming, (they were mostly cherry tomatoes) and the process seemed to take forever. I’ve never been tempted to try it again.
But with so many large and emanently suitable candidates to use this year it was time to retrieve the dehydrator from the top shelf in the pantry, dust it off and have another crack. And since I sourced instructions on the internet, it’s barely been given a rest. So for all those warming winter casseroles and pasta dishes I can now alternately use ‘sun-dried’ tomatoes or my trusty frozen tomato mixes.
In hindsight it was perhaps a bit crazy to plant so many tomatoes, but following our trip to Europe last year, and a French tour that included visiting the Chateau de la Bourdaisière, famous for growing over 600 heirloom tomato varieties, we couldn’t resist buying a couple of packets of different seeds that were available for purchase. Then we bought packets of two other varieties in Venice – after seeing and sampling some of the amazing and diverse tomatoes on display in the street markets. So these, together with a couple of the tried and true varieties we’ve grown previously, has unsurprisingly resulted in an abundance. Our excuse is that we couldn’t be sure the French and Italian varieties would grow well in Tasmania. I think we can now safely say that they do. And I can safely say that tinned tomatoes will definitely be off the shopping list for the rest of the year!