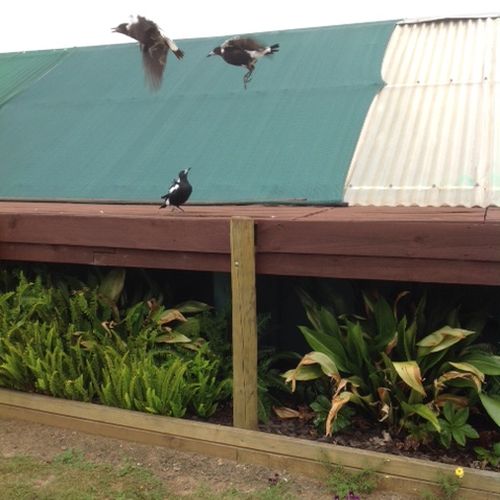 We inherited a magpie family when we moved here as the former owner of the house had fed them for years, along with pink and grey galahs, green parrots and noisy minors. There were none of the smaller birds we used to see at our previous property, despite being only a few kms away. There’s less bush and more sheep and cattle-grazing paddocks surrounding us now, which has perhaps got something to do with it, but sparrows, goldfinches, fairy wrens or robins rarely visit, although we’re hoping this may change when all the native bushes and trees John has planted grow up. This micro-forest is an eclectic mix grown from seeds or cuttings collected from their parents at our previous place, and that will, fingers crossed, eventually attract some of the smaller native birds to both feed, nest and take up residence.
I’m ambivalent about feeding the magpies though. For John they are ‘part of the family’ and the weekly shopping list is incomplete if magpie mince isn’t included. Our black and white family flies in every morning in anticipation of their morsel of mince – and it’s true they do sing very melodiously for their breakfast. And tea, since they repeat the exercise in the afternoon when they expect more. Some aren’t averse to trying it on at other odd times of the day, not that it ever does any of them any good.
Feeding the birds was common practice in both our families – we always threw bread crusts and bacon rind onto the back lawn for the birds at home in northern England. Especially during the winter when the weather made fossicking for food tough for our feathered friends. It’s a practice my mother continued to the last, but it was apparent over 40-odd years of visits home how the number and variety of birds slowly changed. Instead of the sparrows, blackbirds, tits and robins that I remembered watching squabble good naturedly over the scraps on the lawn, latterly it was the UK’s large and thuggish magpies, and fat strutting pigeons who swooped in first, and took the lot before the by-now rarely seen smaller songbirds could get a look-in.
There are many magpie colonies where we live now, and there seems to be no shortage of pink and grey galahs either. John has stopped putting out bird seed (thank goodness) because he had to acknowledge it was the galahs who were aggressively taking over the feeder, stopping the more polite, yet surely equally hungry parrots, from taking a turn.
In winter time when food is scarce then feeding native birds is perhaps OK, but I’m not so sure it’s such a good idea to allow them to expect food twice a day, however prettily they ask for it.